DecarbCities and all you need to know about it 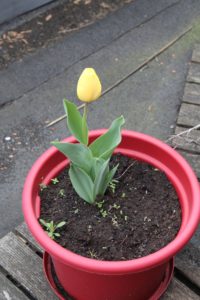 If you are an energy planner in a major European city, chances are you have received a package from EHPA. Unwrapping it, you would have found a small brown box. While this was before Christmas it came as an unexpected surprise to most recipients.
The box was part of our “plan(t) for the future”-campaign and consisted of 6 tulip bulps. Each having a different color, they represent the major benefits of heat pump technology: (1) Renewable energy, (2) Energy efficiency, (3) Clean air, (4) Supply security, (5) Local jobs, (6) contribution to stable electric (smart) grids. The idea behind it: changing the energy system requires long term planning. In order not to forget the main targets, reminders are appropriate. Once planted, the tulips will remind the city planners of the benefits of heatpump system, when aiming to decarbonise cities.

This may have been the end of the story, but it was the beginning: in fact, mayors of major European cities received the package and answered. So I went on a journey talking to (mostly) energy planners in cities and I learned a lot about the issues they face. While cities have their own budgets, they have to balance it carefully between the demands voiced by different stakeholder groups. One of these meetings led me to the energy advisor of the Greater London Authority: a guy named Peter North. We had a very nice exchange of opinions and I realised, that people like him know very well what their problems are and they have an idea on how to solve them in principle. What they are often lacking is a good understanding on “the best solution” for the issues they face.

From this meeting, I took the idea for this year’s conference theme:
DecarbCities was supposed to bring together representatives of cities with planners and the heat pump industry.

The program was shaped to enlighten the participants on the special challenges of energy planning in cities – in particular –  in the light of a much needed improvement of air quality and a reduction of energy demand. A second theme was to provide experience from research and city planners that should show successful examples of decarbonized cities and regions and in the last session we want to show succesful and innovative examples of implemented solutions.

Last: we hope to spark a discussion between speakers and the audience in which, on the one hand, the audience learns about the importance of energy planning and heat pump based, comprehensive solutions for cities while, on the other hand, the speakers can learn from the audience about solutions that are existing in the market and could both fuel the debate and spark new deployment action.

The program is now complete and the conference is 3 weeks away. Have a look and if you have not done so, register here.

The goal is to have an affordable – reliable – clean – safe...